The Spring Hill Chamber of Commerce 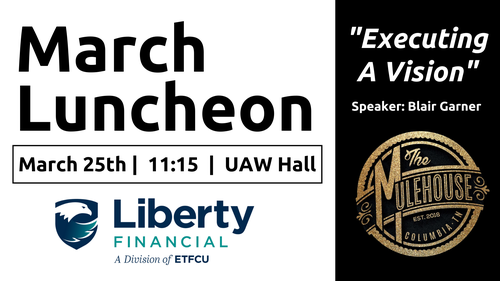 Event Description:
Please join the Spring Hill Chamber for our March Luncheon.
Join the Chamber at the UAW Hall on March 25th from 11:15-1 pm for lunch, networking, and a presentation on "Executing A Vision" by the owners of Mule House.

His is an already storied career, with a continuing upward momentum.  Nine Billboard Broadcast awards.  Three ACM Awards.  Nominations for the Marconi Award and multiple CMA nods as well.  A member of the Country Radio Hall of Fame, as well as the National Radio Hall of Fame.  All of that, and still so much ahead.

Blair’s trek into broadcast began in his hometown of Canyon, Texas when he was only 17.  It was a chance encounter with the owner of his small-town’s radio station that started it all.  “You’ve got such a great voice - I really think you should be in radio,” said the man.  And after only three months on air in that small Texas town, he was snatched away to work in Dallas, Texas — One of the top-10 markets in the country.

From Dallas, Blair quickly found himself working for legendary stations in Washington, D.C., New York City, Houston and Los Angeles.  All of this before he turned 23.

It was in the early 1990’s, Garner’s entrepreneurial spirit drove him to start his own syndication company.  The first offering was his own show, After MidNite.  It tracked as the fastest-growing syndicated show in broadcast history, amassing over 270 affiliates within a one-year span.

After twenty years as the show’s host Blair tried his hand at a morning show — a successful move where the show became the #1 Country show in in the all-too-vital market of Nashville.  Three years in though, the toll was too much for his family.  It was his then 12-year-old daughter who said, “Dad, I don’t honestly feel like we come first anymore.”  With that, Garner chose to resign his position the next day.

Not eager to let Garner go, his syndicator offered him the chance to create The Blair Garner Show — one he could record on his own schedule.  The result was a show that grew to 170 affiliates within its first six months — a show he continues to host to this day.

Garner credits his drive and success to the unwavering support from his parents growing up. “Every day they would tell me to ‘work hard and be kind,’” says Garner. “and even today, I say the same thing to my kids.  It’s our daily mantra.  It’s that important.”

Today, Blair and his husband Eric are creating a whole new business:  The Mulehouse.  A music venue in historic Columbia, TN.

“I’m so grateful for my life’s endless blessings.  And I’m hopeful that this new venture will shine a bright spotlight onto a town my family and I love so much:  Columbia, TN.  In many ways, it feels like everything I’ve been fortunate enough to do and achieve was directed toward this moment in time.  The Mulehouse will be our lasting mark — a community-oriented business built around treating employees and guests with respect, and providing the kind of fan-engagement that’s simply not available anywhere else.” 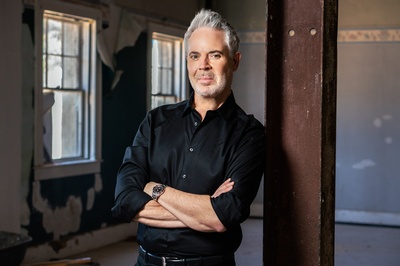